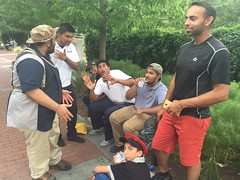 Our Community participated in Philadelphia’s annual Penn’s landing Islamic Festival. This festival brings together the many Muslim communities of Philadelphia and celebrates multiculturalism within the fold of Islam. The day began with a parade of communities, our propagation unit was on display as a main float along with our banner that reads

(There is no god but Allah, [and] Muhammad is the messenger of Allah)

The even continued at Penn’s landing, we had our religious literature on display along with banner’s promoting Ahmadiyyat. We interviewed local Muslims regarding their opinions of Islam in the west and were blessed with interviewing the event organizer.